The Carson Chronicle • May 16, 2019 • https://carsonchronicle.com/6307/science-technology/cyberbullying-on-the-rise/

Cyberbullying on the rise 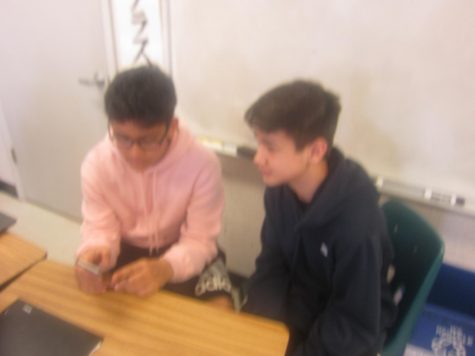 Rohan ManroaTanishq Nerkar shows Ansel Morrill something on social media during a break.

In 2019, one out of three young people has been threatened online, according to the i-SAFE Foundation, a nonprofit that is the leader in internet safety education. This number is higher than ever before. Clearly cyberbullying is increasing, and it is not showing any sign of slowing down.

Many Rachel Carson Middle School administrators say that the issue of cyberbullying is escalating here, and it has been more and more relevant. Over the years, social media has been playing a larger and larger role in the lives of students. The vast majority of students at Carson depend of personal devices for basic activities.  However, despite the increasing danger, there are still many ways to avoid this.

Cyberbullying is when someone or a group of people use electronic communication to bully a person. It usually involves hurtful or threatening messages or pictures that leave the victim feeling dejected or even depressed.

Mrs. Silverthorn said that 2019 has been the worst year for cyberbullying. This is because more and more Carson students have phones, and more students are using social media platforms to communicate with other students.

Many schools, including Carson, have noticed that the issue of cyberbullying is becoming more relevant, and have taken steps to ensure the safety of students online.

“The SRR [Student Rights and Responsibilities] book that we give to students at the beginning of the year talks about rules that students must follow when they are online,” said Mr. Gordon Stokes, the Carson principal. “Carson also established No-Carry Zones in the bathrooms and gym locker to help contain this issue.”

No-Carry Zones and No-Use-Zones have been put in place so kids cannot take pictures of others in certain areas. Such pictures could embarrass the student in the pictures if posted and shared online.

The assistant principals at Carson usually deal with cyberbullying cases if they are connected to the school. “We talk to students who are involved, and we always try to find out the context of the situation,” said Assistant Principal Ms. Christina Oh.

Cyberbullying can affect the victim in many ways. It makes many students embarrassed. According to stopbullying.gov, only one out of 10 victims tells their parents about the situation, and less than one out of five reports the incident to law enforcement. Bullying victims are two to nine times more likely to consider committing suicide or hurting themselves than any other student.

“Cyberbullying victims almost always feel isolation, sadness, and sometimes even depression. It also hurts their performance in school, because they are thinking about what happened to them, rather than the things that they are learning,” Mrs. Silverthorn said.

“It can make them feel insecure about themselves,” Ms. Oh said.

Despite the rise of cyberbullying in middle schools, there are still many ways to avoid and prevent it, as well as ways to help bullied victims.

“The first we would do is talk to the victim. If we can’t find out enough information, we would send them to counselor and they would talk to them,” Ms. Oh said. Mrs. Silverthorn also speaks to victims.

“The club talks to other classes and elementary schools about kindness and empathy, and how cyberbullying affects victims both emotionally and mentally,” she said.

Mrs. Silverthorn also stated that there should a be a whole class or elective that teaches students about digital citizenship, rather than a small after school club.

Mr. Stokes said, “Students need to remember to be responsible on social media at all time.”

Social media is beneficial to students in many ways, including communication with friends. However, the more students depend on it, the higher chance they will be the perpetrator or the victim of cyberbullying. As Ms. Oh stated, “students need to focus on social media in a positive way at all times.”