The state of sports in Carson MS 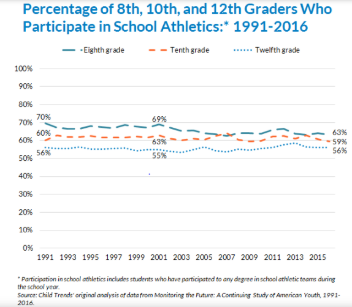 The above graph illustrates the change of student involvement in sports across the nation in eight, tenth, and twelfth grades from 1991 to 2016. Image courtesy of childtrends.org.

The era humans live in today is filled with online interactions and social media. A majority of Carson MS students have phones, and social media plays a large role in everybody’s lives. The interest in sports and athletics, though, is dying down.

The percentage of eighth graders in America participating in sports have decreased by 7 percent, from 70 percent in 1991, according to childtrends.org. This gradual lack of interest in sports is receiving many possible causes. Social media and phones have started becoming widespread and a large part of life in middle schools, especially in Carson Middle School.

Some may argue that a larger pressure from school has presented challenges for students to participate in athletic activity. It also may be the struggles schools have faced to accommodate for these athletic programs as tightening budgets arise, and of course, the fear of severe physical injury.

“For sports, everything mainly depends on logistics and money,” said Mr. Gordon Stokes, the principal of Carson Middle School. Mr. Stokes also believes that social media has some positive and negative effects on sports involvement.

“Sometimes students see famous athletes, and then say, ‘Oh, I want to do that!’ but some students are just more interested on what happens online then sports,” says Mr. Stokes.

Mrs. Lori Molnar, a Health & Physical Education teacher at Carson, said how social media has a large impact on students participating in sports. “I think we should turn devices off for a few days,” she said.

Mr. Kerry Campagna, another PE teacher, says the presence of technology, money, video games, and budgets all have varying effects on why students may or may not participate in athletics.

As sports may be declining in its popularity and participation among American middle school students, the gender gap between girls and boys has decreased from 9 percent in 1991 to 1 percent in 2016, according to childtrends.org.

“I think that there are more opportunities for athletics, especially in this area, for both boys and girls,” said Mrs. Molnar on why this gender gap has decreased greatly.

Mrs. Molnar and Mr. Campagna encourage their seventh graders to be involved in new and fun activities by using what they call an “exploratory model.”

“This helps students experience short, but many different units, so they are exposed to many things,” said Mrs. Molnar on how this model works for their year long curriculum.

But, overall, Mrs. Molnar and Mr. Campagna want students to find what they want to do and follow something they truly enjoy.

“They should put their phones away, and find some movement that you enjoy, and you should experiment with many activities,” said Mrs. Molnar.

They also state that for students to maintain a balance between their athletic and educational lives, parental and financial support, a passionate interest, and a constant flow of encouragement is required.

From the research and studies, physical activity has many everlasting benefits. The human body becomes fit, and internal organs become efficient and work to their limits. Sports can also help students focus on their schoolwork more, and it helps relieve the mind.

“They should have another authority to be by them, by building relationships with coaches,” said Mr. Campagna. “P.E. is basically the state of the art academics. It combines education and physical activity into one.”

As student aspirations and hopes to be successful in sports and school athletics linger, many students question why our school and the county don’t have middle school sports integrated into the school’s agenda and program.

Mr. Stokes, Mr. Campagna, and Mrs. Molnar all agree that the costs of maintaining these programs are very high.

The front office and the Student Council Association also contribute to encouraging students to participate in front of their friends and teachers in sports that many kids love.

This year, Carson sponsored basketball and futsal events that were hosted by Lanier Middle School, another school within FCPS. These events had tryouts, receiving a relatively large outcome.

Many students and even staff attended the events, cheering on their students play against Lanier’s students in two exciting sports. These events built a sense of community between Carson students, but also motivating others that they can do the same.

Sports are one of the most coveted and beloved events that take place in our modern era. Better health is not just the reason people do it, but a feeling, a sense of community engages you in the activity.

It helps students find a place within the hectic and overwhelming hallways of middle school. Mr. Stokes said, “When participating in sports, you’re connected to something bigger than you.”