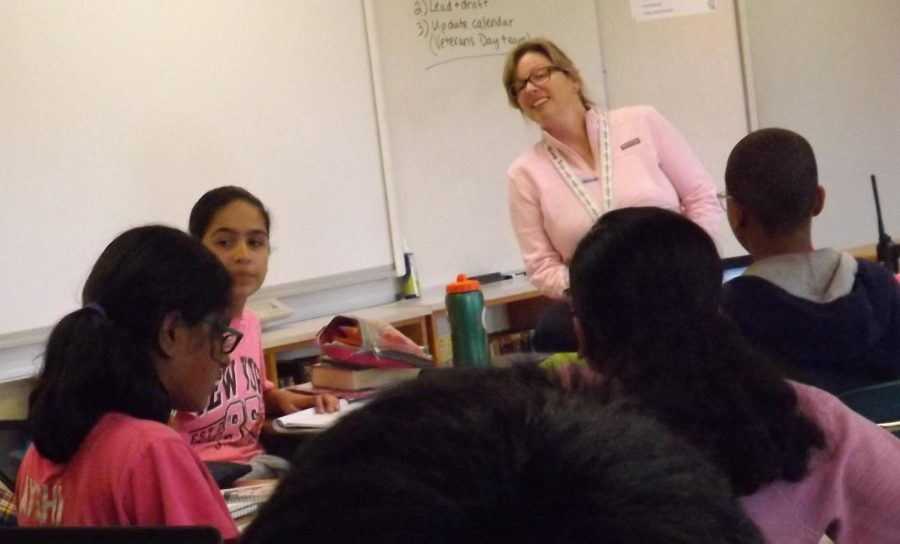 Ms. Melissa Tochterman, the new assistant principal of Rachel Carson, is looking forward to making new memories this school year, after moving from the county’s smallest elementary school in the county to the largest middle school.

“Children are the reason I wake up every morning,” she said.

She arrived on Monday, Oct. 7 to replace previous Vice Principal Ms. Christina Oh and to lead the Champions, Majestics, Trailblazers and Yellowjackets.

“My name is a little hard for some people, but it’s pronounced like Doctor with a T,” she said. “But Ms. T is also fine.”

Ms Tochterman has been a vice principal for 15 years and a teacher for 28. She last worked at Armstrong Elementary.

“There are more kids in one team at Carson than the entire building at Armstrong,” she said. “I felt like I was running all over the place. When you guys were looking for your lockers, I was searching for my office.”

Coming to RCMS was a shocking change.

“The first day was overwhelming,” she said. “I felt like I was 12 again. Everyone’s eyes were on me, but meeting the students and also seeing students that I knew before was really comforting. I got to see familiar faces in the hall and feel the welcome from them.”

“Coming to school everyday empowers me to empower others,” she said. “If I don’t feel like I have made a difference in somebody’s life, even a little, I feel like I’ve failed.”

Ms. Tochterman originally had not considered education as a career.

“I hated school when I was younger,” she said. She was studying business at Boston University when she saw that a neighborhood kid had been suspended for 5 days.

“I saw this kid and I thought, ‘No way he’s gonna be on the streets for five days with nothing to do,’ so he went to college classes with me. The more I talked to him, the more I realized he wasn’t such a bad student.” she said. “He came up to me and said, ‘“You should be a teacher.”’ And I thought, ‘You know what? I’d love that.’ ”

So she switched her major from business to education.

“I decided that I was going to try to make school fun for everyone,” she said.

Carson’s new vice principal strives for an atmosphere of acceptance. “Your mind has to be open you have to be open to take in new things,” she said, “Life is hard enough, right? You’re worried about rumors and gossip, well adults have the same too. We all have weaknesses. The most important thing is to support friends. Be strong for each other and someone will be strong for you.”

Ms. Tochterman has an 11-year-old daughter, Sitina, and a dog named Gracie. Besides being a teacher and administrator in FCPS she has had many other jobs. She has taught at University of Virginia as an adjunct professor and at the mall at Williams-Sonoma where she did cooking demonstrations.

“Isn’t life education?” she said. “We are always learning. How can you move past education?”

Her hobbies include photography, sewing and ice hockey. But she said she doesn’t have favorites in anything.

“I don’t have any favorite colors, food, subjects,” she said. “I do have favorite sports teams though.”

Ms. Tochterman said she still feels welcomed every day when she walks into the doors. She knows that when she enters school, she has to be someone to provide students with security. She is more than happy to teach at schools and help students grow into better people. She said she comes to school every day knowing she could help one student’s day, even if it’s just smiling at them.

“If I could say one thing to everyone here,” she said, “be thoughtful and caring about your words to others. We’re all here to make mistakes, and to grow and learn from them. Embrace your own mistakes—then they don’t become mistakes, they become life lessons.”

She invites all students to stop by her office.