Interns from France arrive to learn about RCMS and America 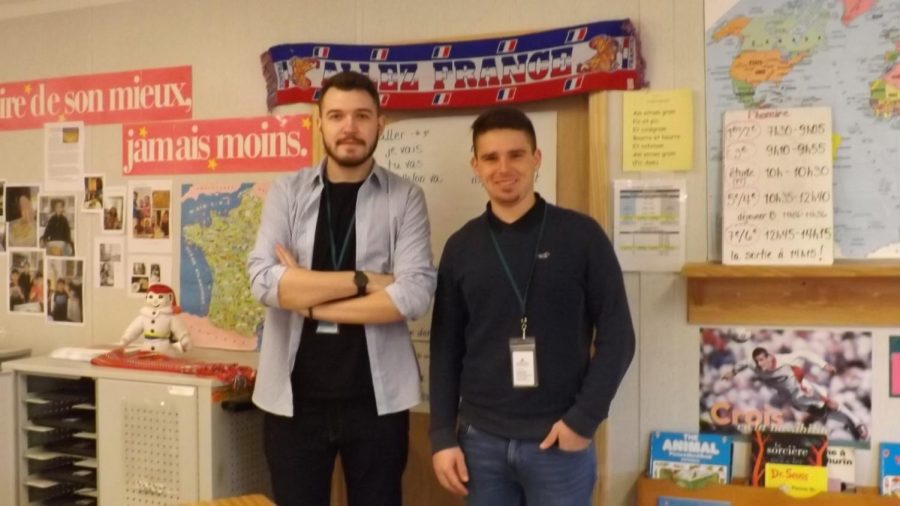 French interns Nathan Crapet and Aurélien Jarlier are spending a month at RCMS to learn about American teaching methods before they return home to become teachers in France.

Nathan Crapet and Aurélien Jarlier are interns from France who arrived at RCMS in January to observe American customs, lifestyle and teaching methods.

“Everything is bigger in the U.S. compared to France,” said Nathan. “For the French, the U.S. is a big country in the world.”

Both interns are from Clermont-Ferrand, a town in central France known for its volcanoes. After living in France for their whole life, the 23-year-olds are on their first trip to the United States for a one-month teaching internship. Nathan wants to become a geography and history teacher, while Aurélien aspires to teach sports.

The pair were surprised at the cold weather when they arrived. But the biggest surprise came when they stepped inside a classroom at RCMS. The use of technology and students’ freedom astonished them.

“French teaching is, uh, how you say, very strict,” Nathan said. “You don’t use technology in the classroom until you are 18 years old.” Phones are not allowed either.

“But it is pretty cool,” Aurelien says, jumping in. “Maybe we can use this when we go back to France.”

The pair said the school day is longer in France–from 8 a.m. to 5 p.m. But students have a two-hour lunch break and two 15-minute recreation breaks, one in the morning and one in the afternoon.

The interns faced some challenges when they arrived. Aurélien was held back in customs for three hours since his passport had a folded corner and would not scan. So even though he landed in America before Nathan, he saw America second.

For the most part, however, they said their first three days in the U.S. were great for both of them. They have already gone to see movies and tried Asian food and tacos. They plan to go to see museums and other sites in New York next week.

“For the French people, coming to America is a dream,” Nathan said.

For Nathan and Aurélien, it’s a dream come true.