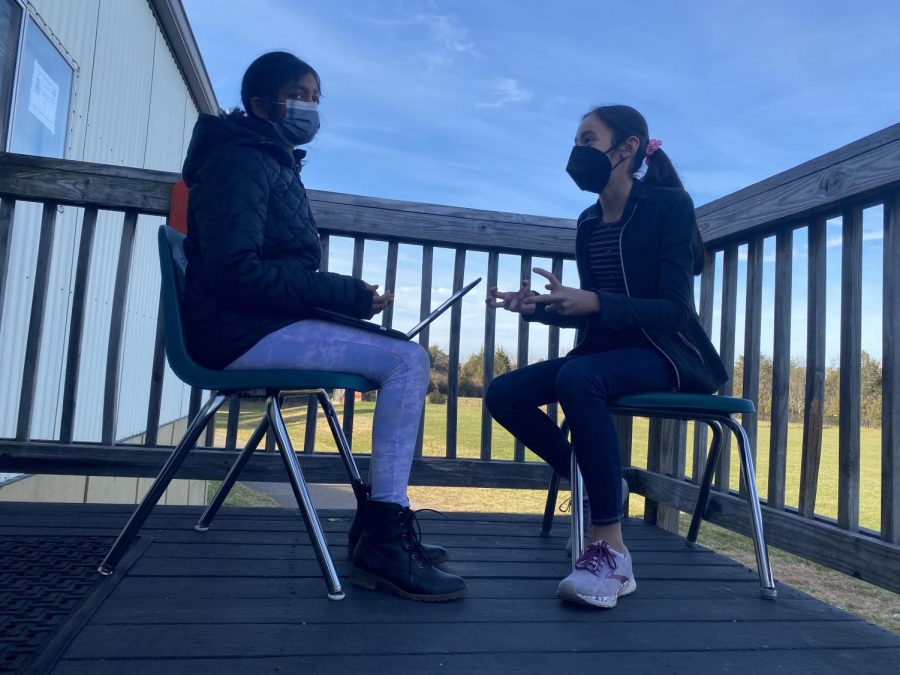 An RCMS student shares her view on the incident.

A threat written in a school bathroom on Dec. 7 has been deemed unsubstantiated, according to RCMS administration, but the investigation is ongoing and any students involved could still face severe consequences.

Mr. Gordon Stokes, the principal of RCMS,  informed parents in an email that a picture of this threat was circling on social media, striking fear among parents and students.

On Dec. 8, many classes were close to half-empty due to parents keeping their children at home.

“I went to school that day,” Yajurvi Piduju, a seventh grader on the Trailblazers team said. “When I was walking in the halls I didn’t feel as safe as before. I usually hang out in the halls but that day I went to the next class quickly without talking to anyone.”

Mr. Stokes sent out another Safety and Security update email at 6:12 p.m. on Dec. 8.

“I want to assure you that the safety of our students and staff remains a priority and we are committed to providing that safe environment,” he said in the email. “We had a successful school day today with no interruptions to our learning environment.”

Yajurvi saw a picture of the graffiti as it began to circulate online.

“I was freaking out but did my best to stay calm,” Yajurvi said.

When the news first came out, a lot of people were unsure whether or not it was an actual threat or an incredibly bad joke.

“I thought it was a prank,” William Paras, a seventh-grader on the Legacy team recounted. “I mean I saw the graffiti on TikTok and I thought, ‘Oh, this is is a stupid joke.’”

However, many students have stated that they were anxious and unsure.

“My parents were worried, they didn’t want me to go to school,” said Yajurvi. “When I was walking down the hallway, I didn’t feel as safe.”

There were many parents who debated whether or not to send their kids to school.

“I first heard the news in the RCMS group chat,” said Reeba Subramanian, a parent of an RCMS student. “That’s where I got the first information. So when I first read it, I thought it was a TikTok prank, but given that we had the Oxford shooting a few weeks ago, I had to take it seriously rather than just brush it off. I ultimately decided to lean toward the idea that it was just a prank, so I decided to send my kid to school.”

Reactions of Staff and Students

“It was scary, whoever did that should be severely punished. They caused a lot of problems!” said Maya Younes of the Trailblazers team.

Mr. Stokes said, “When I got word of the threat I was certainly concerned—significantly concerned—for students and the school because you can’t not take it seriously.”

“It’s just so … messed up,” Ava-Grace Satterfield, a seventh grader on the Champions team said. “I mean the kids here are teens and tweens! It’s not normal for kids to be thinking—or writing—these kinds of things.”

Yajurvi said, “I was shocked that something like this happened in my own school. … I never expected it to happen firsthand to me.”

Ava-Grace said, “It’s very selfish what they are doing. They don’t realize how this affects others. I don’t think that people should go to school feeling worried and scared. The atmosphere that day was dead silent and that was scary too.”

In the update email to the school community, Mr. Stokes was able to share reassuring news.

“After many hours of investigation by our school office of Safety and Security and local police agencies, it was determined that the threat made on Tuesday was unsubstantiated and does not pose an ongoing threat to the Carson community,” he said in the email.

While the graffiti was written on school property, it spread through people sharing it online. Online activity has affected RCMS before, like the Devious Licks challenge from earlier this year.

“From what I’ve seen more as a principal, social media has been more of a problem and a pain than a good thing,” said Mr. Stokes. “I think it should be fine, as long as students use it responsibly.”

This also happened to other middle schools, including Franklin Middle School.

Some students like William think it could happen again, but this does not stop people from keeping their spirits up.

“I hope that it won’t happen again, especially since someone decided to play a prank on people but it became such a big deal,” Yajurvi said.

“The whole thing is still being investigated,” he said. “The punishments will be anything we can do within the SR&R– whatever the highest consequences are, we will apply.”

The email to the public also stated that potential criminal charges also could apply.

Administrators cannot comment on specifics related to this case, but according to the Disciplinary Action section of the Student Rights and Responsibilities booklet, certain acts including threats against school personnel are considered a felony. Consequences listed in the Student Rights and Responsibilities booklet extend to suspension and expulsion.

Officer Matt Griffin, the RCMS student resource officer, has not yet been available for comment.

A message to RCMS students

“My message to students is that most of our people come to school and we do the right thing and they are ready, and responsible,” said Mr. Stokes. “Meanwhile, there are some students who make some bad choices and they need to know that it’s serious—not funny. If you are saying or doing things that are harmful there are consequences.”

“I want kids to come to school, know they are safe, focus on learning, and have a good experience,” he said.