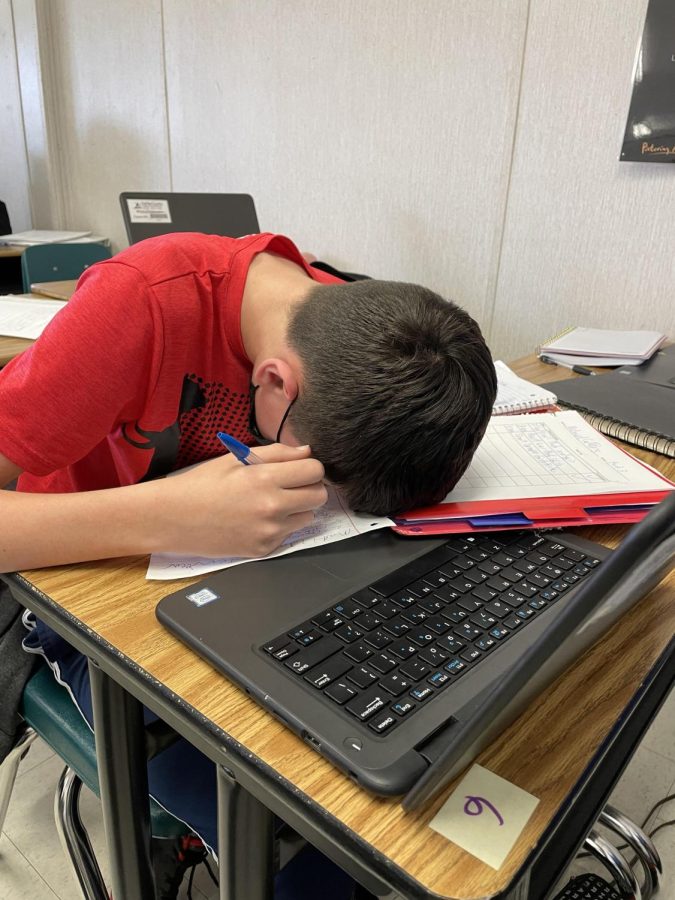 Many students at RCMS have mentioned how the early start of school has put off their sleep schedule causing them to be tired during first period and their grades to decline.

Some may think that this lack of sleep is caused by the schedule, the time they start, the time they end, and which days of the week in person school is held. Because of this, we’ve asked Mrs. Hine on the Voyagers team here at RCMS what time she thinks would be best for schools to start and the days we come in.

“I would say from 8 a.m. to 4 p.m. for four days a week, and the fifth week day would be a planning day for teachers, and a study day for students, she replied.

We also asked Wren Colaco, eighth-grader on the Explorers team, if he works as efficiently during the beginning of the day compared to the end.

They responded, “Absolutely not, I am not a morning person at all, during first period I am exhausted, I’ve fallen asleep in class, whereas in PE, my seventh period class, I’m more awake especially after lunch and all.”

Another eighth-grader, Caelyn Henson, on the Voyagers team, was asked if they were personally affected in a good or bad way with the time that RCMS starts their school day.

She stated, “I’m affected in a bad way, because sometimes my siblings are screaming in the middle of the night, and I wake up at around 3 a.m. and I can’t go back to sleep, so having to wake up at 6 a.m. isn’t ideal in that situation.”

There are multiple downsides to not getting enough sleep every night. According to the Cleveland Clinic, not having enough sleep can cause things such as stress, drowsiness, headaches, and lack of focusing on your surroundings.

This can affect your academic performance because of memory loss, since you won’t be able to remember things as easily. By not getting enough sleep, your relationships with others could also have a downfall. You become more stressed, and might end up causing conflict with others.

According to the Virginia state law, “Each school year shall have a standard year of at least 180 teaching days or a total of at least 990 teaching hours per year.”

The reason RCMS begins at 7:30 is the busses. The buses come and pick up students in middle school then students in high school and elementary. The busses have a to circulate in order to pick up all the students.

Haarathi Mamillapalli, a seventh-grader on the All-Stars was asked if she believed that having seven straight hours of school would be efficient or if having breaks throughout the day would be more helpful to her and others.

She replied, “It is not efficient at all because I have to go from learning about the pythagorean theorem to the 1920s to parts of cells which is very confusing for my brain because there is no time to adjust.”