Geometry over the summer: yay or nay? 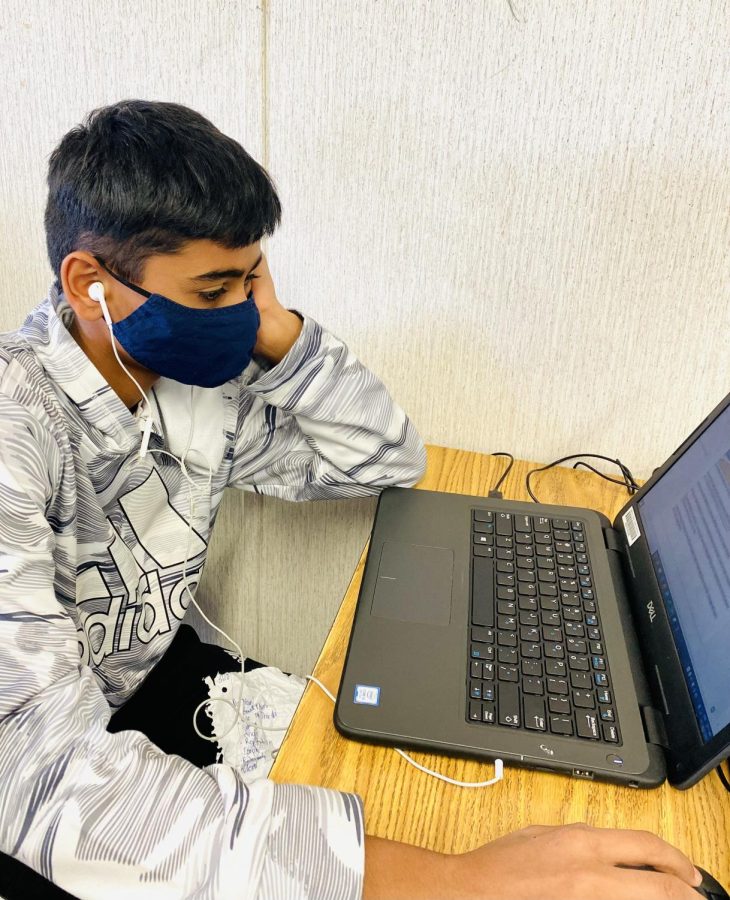 “We had homework for about four to give hours each day,” said Neo Chen, an eighth-grader on the Yellowjackets team who took geometry over the summer.

Geometry as a summer course allows students to get extra credits without having to do a whole year. It’s eligible for seventh and eighth-graders who had successfully passed Algebra 1.

The course spans over a little more than a month, from June 21 to June 28,  having the final on July 8. Signups are available on the FCPS site, and registration ends on June 10. The total cost of the course is $375.

Ms. Elizabeth Joyce and Ms. Mary Lee, both math teachers at RCMS, said the 90-minute synchronous class and four to five hours of independent work a day is a challenge.

“It’s a lot of independent work, which students might think they’re ready for, but often times they’re not,” said Ms. Joyce, a seventh-grade math teacher. “They’re used to having a teacher in front of them … but you don’t get that in the geometry course, you get a little bit of face to face time, but most of it is independent studying and work.”

Ms. Lee and Ms. Joyce both thought that the length of the course couldn’t make up for how much information is in the course.

Ms. Lee, an eighth-grade Geometry HN and Algebra 2 teacher said, “All students must know that seventh-graders taking geometry over the summer is going three years ahead of standard math curriculum. They need to be aware that geometry is a 2nd year high school math course taken as a seventh-grader.”

Teachers also agree that many students don’t fully understand the concept when they take the course online because they don’t have the opportunity to ask questions.

Ms. Joyce says, “It’s a short class, and in my opinion, that’s not enough time to learn a year’s worth of content.”

A lot of students think it’s very similar to online school, but according to Ms. Joyce, it’s extremely different and a lot harder than it seems.

Vincent Ji, an eighth-grader who took geometry over the summer, thinks it’s not so bad.

“If you prepare for it, you should have enough time to do other stuff, and unlike normal school you have more freedom, because it’s online so you can choose when you do the tests and there is no pressure,” said Vincent, who is on the Yellowjackets team.

Ms. Joyce said students should consider the effect on their summer.

“You worked hard all year, you want to take some time to relax, and this summer course really cuts into that,” Ms. Joyce said.

Tessa Gay, a seventh-grader on Dream Team, said she thinks one month isn’t enough time to learn a year’s worth of content.

“I don’t think doing geometry in a small amount of time is enough to properly learn the subject,” Tessa said.

Both Ms. Lee and Ms. Joyce said geometry over the summer is overwhelming and most students have to be determined and motivated to push through the course.

“If a student cannot be prepared for each class daily and cannot spend several hours of productive self-learning study time, the amount of content and speed of the lesson will overwhelm the student,” said Ms. Lee

Vincent also believes that this course requires your full attention.

“My opinion is, don’t take it unless you’re prepared and you will need to sacrifice everything else to focus on this,” he said.

Vincent and eighth-grader Neo Chen said that it wasn’t that bad. They spent about four to five hours on work, three quizzes and one unit test per day, much like a new unit each day. Students taking the summer course had to only focus on this class instead of doing normal summer activities.

Raina Gao believes that taking this course will give her an opportunity later on in her school years.

“I’m choosing it because I want to get ahead in math and I want the opportunity to have a second chance if I fail one of the math courses in the future,” said Raina, a seventh-grader on Dream Team.

Both students and teachers are aware that speeding through the class could possibly lead to later failure.

“Math builds — if you don’t master the class before, it makes it harder to work on the class you’re in,” said Ms. Joyce.