The Carson Chronicle • May 1, 2022 • https://carsonchronicle.com/8924/student-life/wordle-the-game-that-blew-up-the-internet/

Wordle, the game that blew up the internet 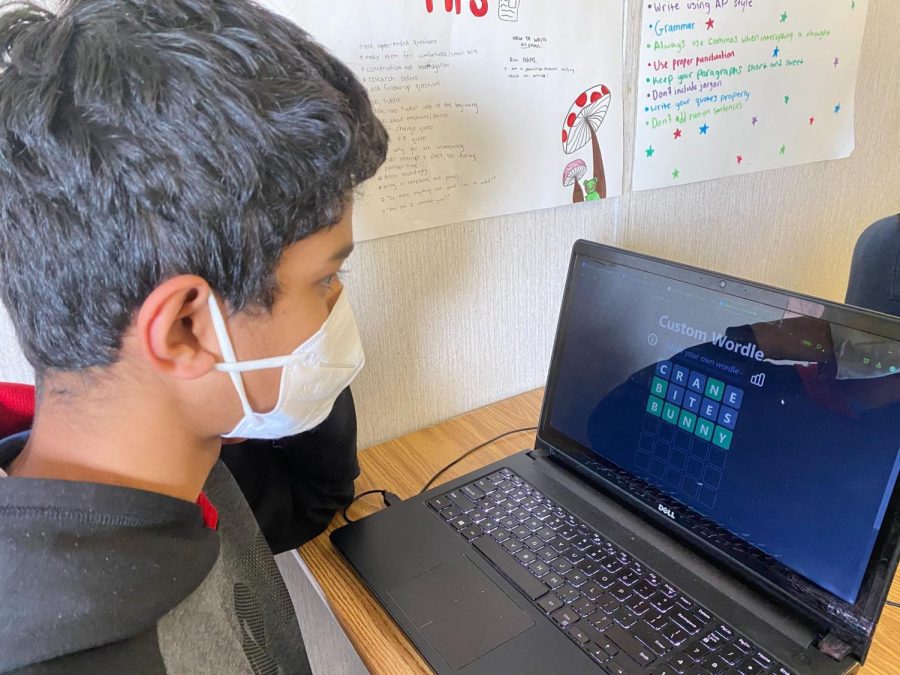 Abijith Ramesh, an eighth-grader on the Dolphins team, plays Wordle to pass time.

Wordle, a word game created by Josh Wardle, has taken RCMS by storm, becoming a major part of many students’ and staff members’ daily lives.

“I love Wordle because it is fun, since it gives me an open vocabulary,” said Thanwa Dahab, an eighth-grader from the Dolphins team. “I usually play it during my free time at school, such as Panther Time.”

Wordle is available to students every Panther Time during the Advisory Block. It is posted on the Rachel Carson Student Central Schoology page.

There are many students at RCMS who are preoccupied with the game, like Surya Raj, a seventh-grader on the Trailblazers team.

“I like Wordle because it challenges my brain,” Surya said. “It makes me think about the different combinations of words.”

According to a form that has been sent out to 119 students attending Rachel Carson Middle School, three students out of every five say that they enjoy Wordle, but it is not their favorite game. On another level, 15 percent of the students also said that they love the game up to the point where they dedicate their lives to it.

Teachers’ interests have also been sparked by the existence of this word game, as anyone can play this game if they have even the bare minimum of knowledge related to words and vocabulary. Ms. Christina Cho, an English teacher on the Champions team, said that this game has been beneficial to her and proves to be a great game to pass time.

“I think it’s improved my ability to focus on a task,” said Ms. Cho, the English teacher on the Champions team.

She said that Wordle is a good mental exercise.

“I think the con is when people create longer than five-letter words that are impossible to solve,” Ms. Cho said.

But not everyone enjoys the game, like 1.7 percent of the students at Rachel Carson Middle School. Among them is Kashvi Sriramaneni, a seventh-grader on the Majestics team at RCMS.

“I don’t like Wordle,” Kashvi said. “They are frustrating, and you don’t really know how to start it off.”

Sofina Zelaya, an eighth-grader from the Wolves team, shares this opinion with Kashvi.

“A friend introduced it to me this year, and it’s kind of boring,” said Sofina. “I don’t think it’s beneficial because it’s just a game, and not a lot of people pay attention to it.”

Ishita Bennabhaktulla, seventh-grader on the Champions team, can’t decide if Wordle is good or not.

“Wordle helps grow your knowledge,” Ishita says, “but they’re also at a level of difficulty that might frustrate students.”

Many students found this game through sources like friends, RCTV, teachers, and family members.

“Everyone talked about the game Wordle, but I didn’t really know what it was.” says Ishita, “My English teacher announced that we would be playing Wordle that day and taught us,  till then I had no clue.”

These changes in classroom environments have not only occurred at middle schools like Rachel Carson. According to a student on the RCMS Yellow Jackets team who has chosen to remain anonymous, teachers from Alexandria City High School and Meridian High School incorporate Wordle into their English lessons.

Teachers in schools apart from Carson are using this game for unit vocabulary, CVC word practice (consonant, vowel, consonant), and just as a game to take an educational break for some time.

The purpose of Wordle is to guess a mystery word that is computer generated at random. Throughout the game, you will be guessing, with clues the computer provides through colors, and with these hints, the guesser will guess the word. The game takes some trial and error, but having an extensive knowledge of words can help during the game.

According to Sofina, in many of her classes, her teachers allow her and her classmates to play Wordles during class.

As an English teacher, Ms. Cho incorporated a Wordle into class after a lesson.

“Wordles are fine,” Ms. Cho says, “as long as they don’t serve as a distraction.”

Ms. Cho completes students’ custom Wordle they have sent her and encourages them to play this word game.

“I have done Wordle that students have sent me.”

Other teachers at Rachel Carson Middle School, such as Ms. Richa Khedkar, a long-term science substitute teacher on the Dream team, allows students to play Wordle in class as a game to play after all of their work is done.

This word game has many students and staff on different ends.

“I think Wordle is a great game to grow your vocabulary,” Rijuta Purankar, a seventh-grader on the Dream Team said, “at the same time, I think it may serve as a distraction sometimes.”

How Wordle has influenced the game world

After the game Wordle went viral, many other games have been popping up with a similar name and concept as the word game. Games ranging from geography to math have been spun-off from the original game. Below are just a few of the games that have been inspired by the game Wordle.

Worldle: A geography game in which the guesser must guess the country based on the image depicted. You are then told the distance between the guessed country and the mystery country and which direction you have to go.
Globle: A geography game where the guesser tries to guess the country by knowing if the guessed country is closer or further to the mystery country by the color of the guessed country.
Nerdle: A math game where the guesser tries to guess the calculation. Each guess requires a valid equation containing an equal sign.
Primel: A number game in which the player attempts to find the five-digit prime number.
Ooodle: A form of Wordle, but it’s related to math. The point of the game is to guess the numbers in a number sentence.
Spello: A spelling game where an audio is given to the user and they can only play it three times. After listening to the audio, the guesser tries to find the word that the audio is saying.
Waffle: This word game is another variation of Wordle, but instead of trying to guess one word with no hints, letters are provided for the guesser to rearrange. The goal is to make six different words in 15 moves or less.

Wordle is also available in 51 other languages, some of which are Spanish, French, Chinese, Arabic, Bulgarian, and Tamil.

People are also using this viral game to spread problems and ideas such as climate change.

The IIED (International Institute for Environment and Development) has made a spin-off version of the game Wordle, “A Greener Worldle” to spread awareness of climate change, and almost 150,000 have played the game. This game has brought a wider audience to environmental issues and brought eminent scientists to help with this cause.

“Wordles are beneficial in learning and can have a positive impact on the environment as well,” Liat Eshetu, an eighth-grader, on the Explorers team said, “it’s awesome!”