The economics behind after-school snacks 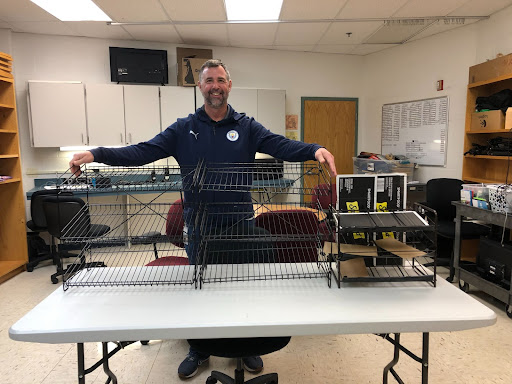 Mr. Pawlowski, the after-school program specialist, displays empty snack stands after having them all donated for spring break.

Ritvik Jain, a seventh-grader on the All Stars team, waited patiently in the long line of students in front of the after-school snacks stands, eager to purchase a bag of his favorite chips.

Ritvik is one of the many students who buy after-school snacks as a way to nourish themselves after a long day at school.

Beginning about four to five years ago, Carson began selling after-school snacks to students three times a week on Mondays, Wednesdays, and Thursdays as a way to energize students for their extended hours at the school.

“The idea began when students started complaining about going all the way to the vending machines for after-school snacks and their teachers not allowing them to do so,” said Mr. Adam Pawlowski. “This led us to start providing them with an easier and more accessible way to purchase something to eat.”

Mr. Pawlowski said he also wanted to make some more money to support the after-school program. “[I started it by] speaking with my colleagues when I started in this position about what they were doing, and then getting the OK from my supervisor to — based on county guidelines — be able to sell snacks.”

Over the years, the snack stands have become so popular that approximately 80-100 students crowd over them every week.

“We have swarms of students outside my door pushing each other to get a snack each day — it’s madness,” said Mr. Pawlowski.

Ms. Amy Vassar, one of the two other teachers who help manage the stand, said it can take awhile to get through everybody.

“Some days, there’s a line down the hallway of [over] thirty kids,” she said.

Eighth-grader Akhil Adipudi, a student on the Wolves team, is a frequent visitor of the stand.

“The snack stand is really popular — I go there pretty much every week,” he said. “[The amount of people] is understandable, since some can be really hungry after school if they have A or B lunch.”

Because of this, Mr. Pawlowski is trying several methods to reduce crowding while still giving after-school students opportunities to buy snacks.

“We’re gonna try a couple different things, [like] having students come down depending on which floor their club is on, and splitting it up at certain times,” explained Mr. Pawlowski, “[A]nd not selling snacks right at 2:15 to reduce the initial rush of students.”

This has resulted in major profits of around $400 to $800 depending on the demand that week. He uses most of the profits to buy snacks for the following week.

“If any remains, then I buy sports equipment for some after-school clubs and the gym,” said Mr. Pawlowski.

However, in order to use the money, it is first placed in the school’s deposit account from where Mr. Pawlowski is able to take a certain amount of money from the account and buy more snacks from the store.

The snacks are sold for 50 cents for cookies and chips as well as $1 for candy and drinks; however, some students believe they are overpriced.

“They are excessive by a significant margin. I do not want to get out like $5 for three pieces of candy and I don’t carry like $5 in there, I only have about 50 cents,” said Mariella DeFede, an eighth-grader on the X-Treme team.

On the other hand, a few other students feel that the prices are reasonable for what they are selling and should keep them for the following years.

“I think their prices are great because usually when you go to a gas station or somewhere to buy these types of snacks, they’re like $1 or $2,” said Ritvik. “Here they’re giving them for 50 cents, so I think it’s a good price.”

Many changes have been made to the stand since the beginning of the school year to optimize the stand’s performance. For instance, some prices were changed and the stand moved from in front of the lecture hall to Mr. Pawlowski’s office.

Some students have suggested selling healthier options to allow for the money to be spent on promoting student wellness.

“I would recommend selling healthier foods for students, like for example, those chewy-granola bars you get at the store,” said Aaryasinh Vaghela, an eighth-grader on the Dolphins team. “They are healthy, they give you energy, and sold in bulk, so it’s good.”

However, Mr. Pawlowski feels that providing a variety of healthier options is not economically beneficial.

“We have explored and attempted healthier options, but we noticed it wasn’t working as efficiently with the students,” said Mr. Pawlowski. “Healthier options are more expensive to buy, and students will not end up purchasing them, so we just go with the old supply and demand strategy.”

He’s still considering it for next year, though.

“[N]ext year we’re gonna be looking at selling some pizza, and some healthier snacks,” said Mr. Pawlowski. “I’m also gonna send out a survey at the beginning of the school year to get an idea of what students would like to see sold, and try to incorporate some of that into the snack [selection] as well.”

Regardless, many students are glad for being given the option of purchasing a snack to get them through their additional after-school activities and hope that the program will last for new Carson students.

“It was a really good idea to implement something like this for students because we’re all tired at the end of the day and are lucky enough to have something to eat,” said Mariella.